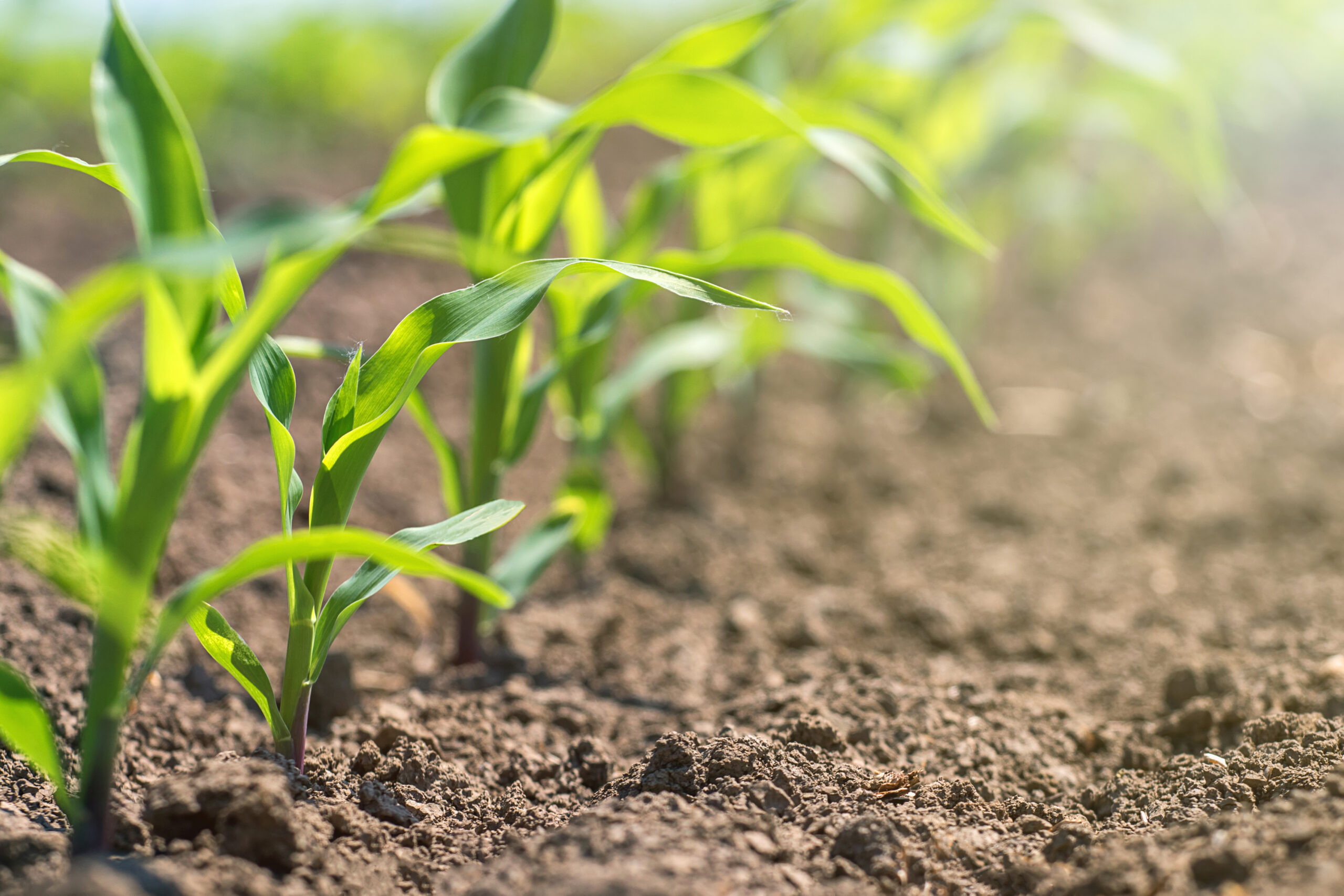 After extensively examining the data from our field trials, we’re excited to share insights from our early season field visits of Terrasym for Corn! 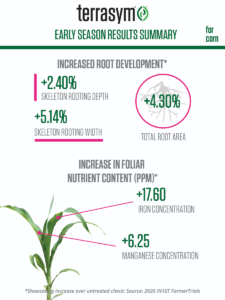 NewLeaf Symbiotics is partnering with independent data company IN10T and their expansive FarmerTrials Network this growing season to bring commercial-scale data and insights on the agronomic benefits of the Terrasym product line. As an extension of these trials, NewLeaf scientists are also using DIRT (Digital Imaging of Root Traits) software[i] for root characterization and conducting tissue sampling at each trial. 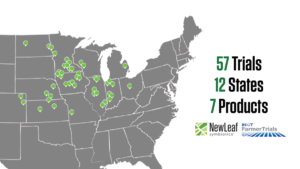 These studies will take our understanding of product claims such as improved root development or enhanced nutrient uptake, and assign tangible numeric values to them and help the team better understand performance within real-world growing conditions.

After receiving data from IN10T’s early-season visits to our corn biostimulant trials, and analyzing 24, first-field visits we’re excited to share some preliminary results!

At each FarmerTrials location, stand counts and growth stage assessments are taken during the preliminary visit. Additionally, 10 plants are chosen at random from each treatment by IN10T field technicians. They are dug up, rinsed of soil, and photographed on a black background with a size marker (a poker chip) to be processed using DIRT software.

“This tool allows us to measure, analyze and develop an enhanced understanding of what plant scientists who specialize in root phenotyping affectionately refer to as the ‘hidden half’ of plants,” says New Leaf’s Technical Product Lead, Dr. Allison Jack.

In addition to the characterization of roots using DIRT software, IN10T field technicians collected 25 tissue samples from each treatment and sent them to a third-party lab to assess leaf tissue nutrient content. In 2019 greenhouse trials, Terrasym showed enhancements in nutrient concentration in corn.

“We’ve seen several beneficial effects of M-trophs in the lab and greenhouse at NewLeaf including, accelerated root development, higher photosynthetic capacity, and greater nutrient capture,” says NewLeaf’s Manager of Field Biology, Patrick Vogan. “The field trials with IN10T show us what effects are consistently present in the real world of a farmer’s fields.”

While scrolling through the first round of DIRT photos, the importance of utilizing the platform became apparent as it was difficult to visualize significant differences between the treated and untreated check at such a young growth stage. Despite the naked eye’s inability to calculate root depth and width at first glance, it was able to catch something else that took the team back to an insight from preliminary R&D efforts: enhanced nodal root development.

During screening of isolates for pipeline advancement from the greenhouse to the field, NewLeaf scientists noticed consistent increases in nodal root development on corn plants that were treated with M-trophs. Seeing this trend continue at the field level prompted the team to take a closer look, and after using ImageJ[ii] to analyze root specimen images, our scientists were able to document a 9% increase in average nodal root length with Terrasym for corn. 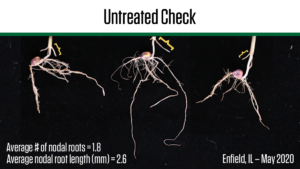 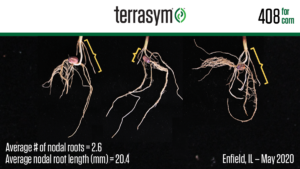 Nodal roots are a crucial aspect of root development in young corn. Extension corn specialist and Professor of Agronomy at Purdue University, Dr. R. L. (Bob) Neilson, cites that nodal roots are involved in a corn plant’s transition from complete nutritional dependence on the kernel to the ability to uptake nutrients, including starter fertilizer, from the soil around the V3 leaf stage.

“Damage or stress to the first few sets of developing nodal roots during the time period V1 to V5 can severely stunt or delay a corn plant’s development. Damage to the first few sets of nodal roots forces the young seedling to continue its dependence on kernel reserves longer than is optimum. If the kernel reserves are nearly exhausted, continue seedling development is easily stunted and seedling death is not uncommon.”

Although the correlation between nodal root development and yield has yet to be determined, it’s important to note these roots are critical to standability in corn during dry down. NewLeaf is excited to continue to closely monitor the trials showcasing these advantages as the growing season progresses.

One of the most exciting elements of utilizing DIRT software to evaluate roots is the ability to quantify Terrasym for corn product claims. It’s one thing to slap, “enhanced root development” in an advertisement. It’s something else entirely to be able to track data points that support the claim.

Terrasym for corn has shown up in our 2020 IN10T trials, showcasing a 4% increase in total root area with almost a 2.5% increase in rooting depth and over a 5% increase in rooting width compared to the non-treated control planted in the same field. Increases in root development like this in turn could enhance nutrient acquisition. Combine that with the M-trophs’ ability to secrete beneficial molecules into the root zone that can bind and transport yield-enabling micronutrients, and you’ve got a corn plant primed with high-yielding potential. 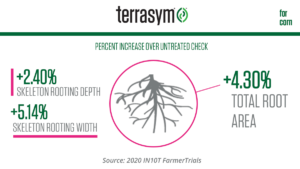 As a company with deep roots in research and development, it’s no surprise NewLeaf’s scientists have noticed quite a few greenhouse trends over the years. One such documented trend was an increase in foliar tissue nutrient concentration. Further, the IN10T trials provided the perfect opportunity to analyze these results in commercial-scale settings.

“Our greenhouse study in 2019 found Terrasym for corn significantly increased foliar concentrations of several nutrients during the first several weeks of plant development, especially iron & manganese. The IN10T field trials showed the same pattern, too,” says Vogan. “As a researcher, it’s satisfying to see a product like Terrasym show consistent effects, not only on crop yield but also in other important plant performance metrics like nutrient uptake. 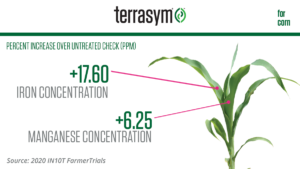 According to AgWeb, corn iron deficiencies can cost 5 to 10 bu. per acre, making the concentration of this nutrient vital. Deficiencies show up faster in soybeans than in corn, making it more difficult to spot. “In corn, iron deficiency symptoms include striping between the veins, running the length of the leaf. If the deficiency becomes severe, the entire plant might turn white.”

Manganese also plays a critical role in corn growth. Farm Journal Field Agronomist Ken Ferrie explains, “It affects chloroplast formation in leaves, which impacts chlorophyll production. It also plays a role in building carbohydrates and metabolizing nitrogen, especially in corn. It also serves as a trigger that causes certain enzymes to perform their roles in the plant.”

Seeing trends extend from the greenhouse to the field solidifies the work NewLeaf scientists have committed to over the years. Even more, the partnership with IN10T allows the team to better understand the field-level impact of such findings.

The growing season is progressing nicely and so is the data analysis. Be sure to follow along as we continue to better understand how Terrasym products perform on farms like yours.